The previous post in this series discussed the concept of adding an event model to RESTful APIs. This is a follow-on to that discussion, describing how the object model and event model implemented in the Smart Object API are used to create a multi-protocol IoT hub, simultaneously exposing MQTT, CoAP, and HTTP/REST interfaces to an instance of a Smart Object.

Figure 1 shows how a Smart Object encapsulates a set of resources and exposes them as M2M Protocol Endpoints. The endpoints of different M2M protocols can expose a single Smart Object, providing a multi-protocol bridge function with embedded data models, protocol translation, and event forwarding. 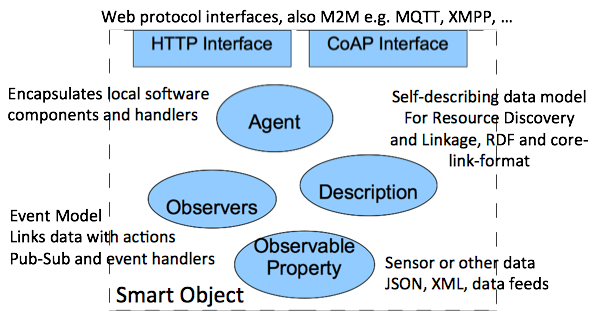 The Observable Property supplies the most recently updated representation of a data source, which can be practically any supported content type, and optionally can provide time and location along with sample history and other metadata. A Smart Object may contain zero or more Observable Properties.

The Description contains the Data Model for the Smart Object, including the structural and taxonomic models for resources and resource configuration, and high level information models for application level discovery and linkage.

The Agent is a container for the software that runs the Smart Object, consisting of locally executed event handlers and background processes (daemons). Event handlers are invoked by the local Observers configured to monitor local Observable Properties.

Figure 2 shows the structure of a Smart Object and the layered encapsulation of Observable Properties, which themselves have Observers and Descriptions as associated properties.

An Observable Property may have zero or more Observers, in any combination of Publishers, Subscribers, and Event Handlers. 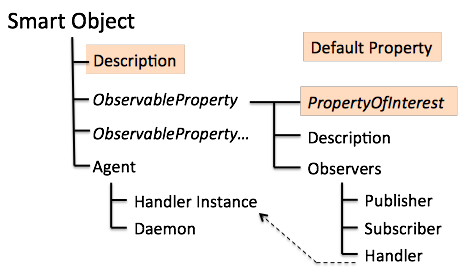 For more information about the SmartObject, with demo and code examples, see the online presentation at Slideshare:

IoT Toolkit and the Smart Object API - Architecture for Interoperability

The Publish/Subscribe model used in MQTT and many other M2M systems is very easily mapped to resource observers. Figure 3 shows a diagram of an MQTT Observer associated with a Smart Object Observable Property such that it can publish updates to the MQTT broker that result from PUT operations and subscribe to the MQTT broker updates and apply them to the Observable Property . 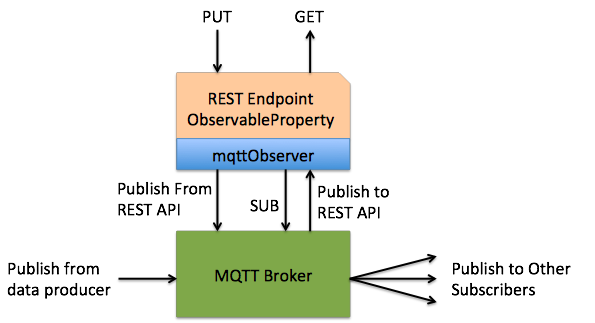 The underlying binding that makes this work is using the REST resource path as the MQTT Topic. This way, the topic can be used to create and update REST endpoints, and REST updates can be mirrored to similar paths in other Smart Object instances. This also facilitates association of Description metadata with MQTT topics at endpoints.

Figure 4 shows the Observer-Publisher publishing the update resulting from an HTTP PUT ot CoAP POST to update the resource. In general, a Create operation could also result in the publishing of a topic, either on the create itself or on the first update. 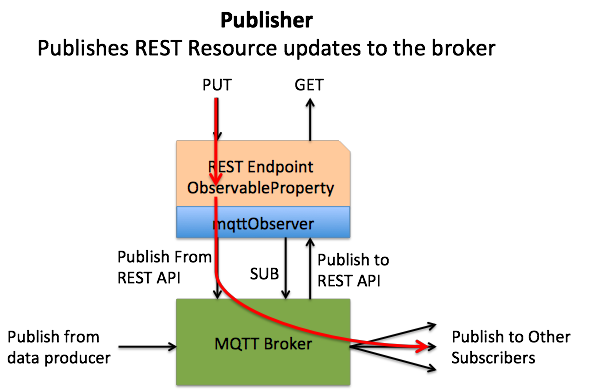 Figure 5 shows how the Observer-Subscriber creates a subscription in the broker, which updates the REST endpoint when a message is published from the broker on the topic corresponding to the resource path. 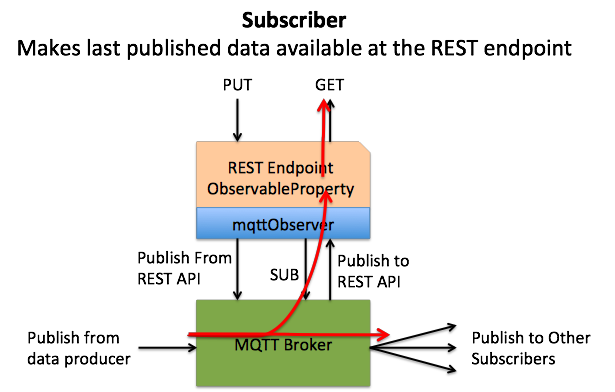 Figure 6 shows how the Publisher and Subscriber can be used together to create an MQTT REST bridge. Topics published by the broker update the REST endpoint, and REST updates publish the topic to other subscribers. 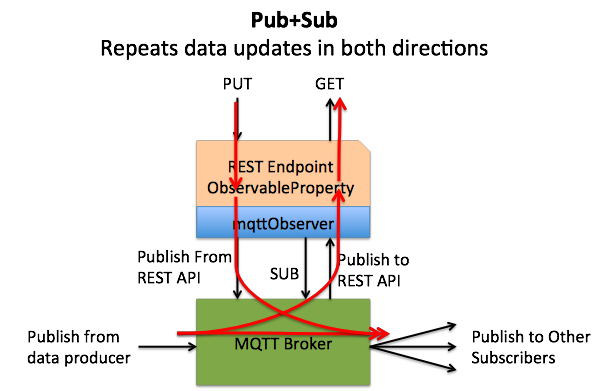 Figure 7 illustrates that multiple Smart Object instances can connect to a broker and participate in read-write sharing of REST endpoints across MQTT (or other protocol) connections. 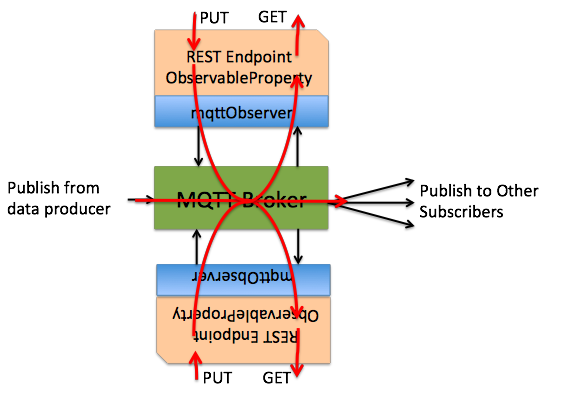 CoAP Bridge using the object model and a semantic proxy

The CoAP protocol also includes a REST resource model with events and a rudimentary data model. The core-link-format (RFC6990) provides a link-format encoding and namespace for a simple semantic graph. The IPSO Application Framework builds on the basic vocabulary of core-link-format to describe home and building automation concepts.

The CoAP Event model is based on an Observe extension to the GET operation that subscribes the client to changes in the Observed resource. these changes are best-effort communicated back on the return socket connection to the client in a similar fashion as websockets but using UDP.

Figure 8 shows how the CoAP interface exposes RDF triples that are stored in the Description graph as link-format relations through a Semantic Proxy. 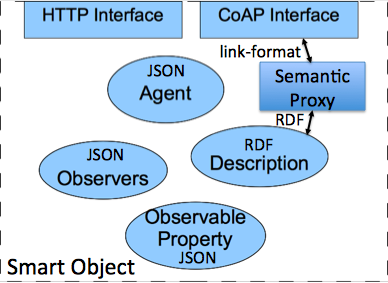 M2M Protocol Interoperability Demonstration based on a Weather Sensor

These concepts are demonstrated in concert in figure 9, which depicts our live on-line demonstration system involving multiple Smart Object instances in gateways, servers, and cloud instances communicating with each other through various M2M protocols. 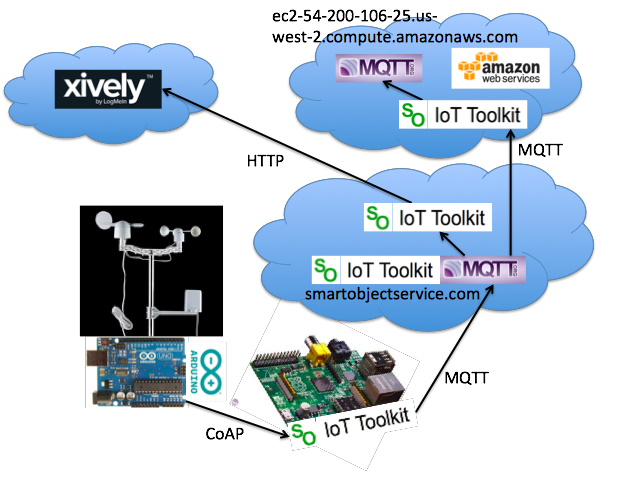 AN MQTT Observer in the gateway relays updates to a SmartObject instance in the PaaS at http://smartobjectservice.com, which operates an MQTT broker and HTTP + CoAP REST bridge.

A second Smart Object instance at the PaaS subscribes to the MQTT broker and updates itself. These updates are filtered and aggregated to reduce load on the 3rd part API and sent to Xively to update the data feed for storage, viewing, and sharing.

Another Smart Object instance in a user’s personal cloud (here an Amazon EC2 t1.micro instance) also subscribes to the MQTT broker and provides a local Smart Object and MQTT broker to supply weather data to weather forecasting services and other data users for a small monthly compensation. This instance provides CoAP, HTTP, and MQTT access to live weather data from the weather sensor.

Node-RED provides an event-graph programming model that is a natural fit for the Smart Object Event Model.

Node-RED instances are easily connected over the network interface by subscribing to MQTT topics and publishing back to the REST broker using existing I/O nodes.

For local integration, there will be nodes that connect to Smart Object event handlers directly and publish back to Observable Properties through a Node-RED Observer.

IoT Toolkit is the reference implementation of the Smart Object API and related tools. The API is nominally complete and relatively stable. The roadmap going forward is to add useful features and create a developer release that can be installed as a Python library and hosted on Pypi.